A VIRTUAL INTERVIEW WITH ARTHUR NERSESIAN AND JENNIFER BELLE

A VIRTUAL INTERVIEW WITH ARTHUR NERSESIAN AND JENNIFER BELLE 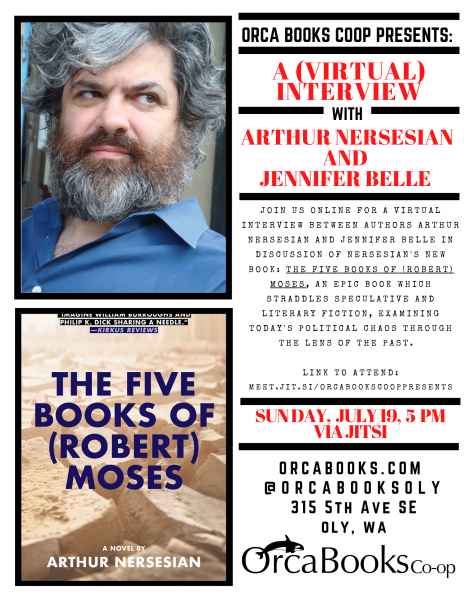 Join us online for a virtual interview between Arthur Nersesian and Jennifer Belle in discussion of Nersesian's new book: The Five Books of (Robert) Moses, an epic book which straddles speculative and literary fiction, examining today's political chaos through the lens of the past. 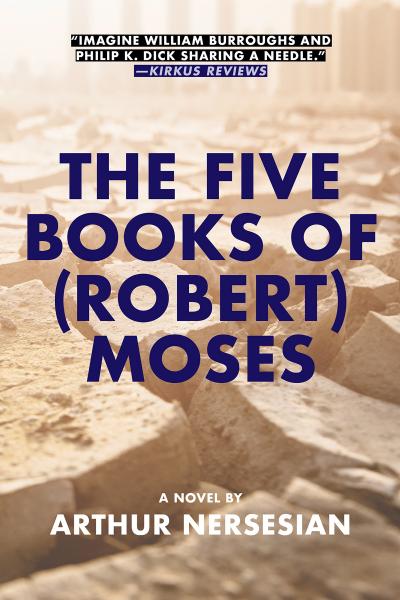 After a domestic terrorist unleashes a dirty bomb in Manhattan in 1970, making the borough uninhabitable, FBI agent Uli Sarkisian finds himself in a world that is suddenly unrecognizable as the United States is faced with its greatest immigration crisis ever: finding housing for millions of its own citizens. The federal government hastily retrofits an abandoned military installation in the Nevada desert, vast in size. Despite the government’s best intentions, as the military pulls out of “Rescue City,” the residents are increasingly left to their own devices, and tribal warfare fuses with democracy, forming a frightening evolution of the two-party system: the gangocracy. Years after the Manhattan cleanup was supposed to have been finished, Uli travels through this bizarre new New York City, where he is forced to reckon with his past, while desperately trying to get out alive. The Five Books of (Robert) Moses alternates between the outrageous present of Rescue City and earlier in the twentieth century, detailing the events leading up to the destruction of Manhattan. We simultaneously follow legendary urban planner Robert Moses through his early years and are introduced to his equally ambitious older brother Paul, a brilliant electrical engineer whose jealousy toward Robert and anger at the devastation caused by the man’s “urban renewal” projects lead to a dire outcome. Arthur Nersesian’s most important work to date examines the political chaos of today’s world through the lens of the past. Fictional versions of real historical figures populate the pages, from major politicians and downtown drag queens to notorious revolutionaries and obscure poets.

PRAISE FOR THE FIVE BOOKS OF (ROBERT) MOSES

“A postmodern masterwork that outdoes Pynchon in eccentricity—and electricity, with all its dazzling prose.” —Kirkus Reviews, STARRED Review

“Nersesian is one of my favorite New York authors; this tome is one to lose yourself in.” —Bob Odenkirk, actor, Breaking Bad

“Imagine Kurt Vonnegut channeling the Book of Revelations and transmitting it to the faithful of a postcataclysmic New York City and you get a glimpse of the monumental literary feat Arthur Nersesian has accomplished . . . It is imaginative, frightening, and hilarious, often all at the same time.” —Michael Imperioli, author of The Perfume Burned His Eyes

“Arthur Nersesian’s fantastical magnum opus is both a love song to the vibrant culture of ‘old’ New York City and a cautionary commentary on the rampant political opportunism of the twenty-first century. As meticulously plotted as the best Stephen King novels, with world-building that might arouse jealousy in Philip K. Dick, The Five Books of (Robert) Moses shows us why Nersesian has established himself as one of New York City’s most vital chroniclers.” —T Cooper, author of Real Man Adventures and the Changers YA series 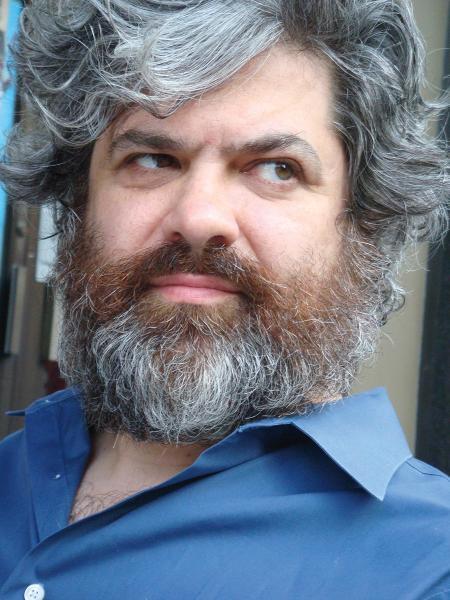 ARTHUR NERSESIAN is the author of fourteen books, including the cult-classic national best seller The Fuck-Up (more than 100,000 copies sold), Suicide Casanova, Manhattan Loverboy, East Village Tetralogy, and Mesopotamia. He is a native New Yorker who runs a writing workshop in the East Village and can be reached on Facebook. 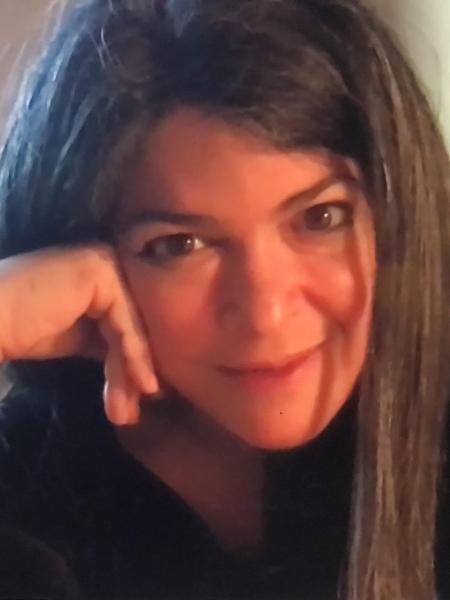 JENNIFER BELLE is an American novelist, based in New York City. She attended Bronx High School of Science and dropped out of college. She has also written columns for Ms. magazine. In 1996, she published her first book, Going Down, telling the story of a woman in her 20s, a topic that would appear also in her subsequent writings. In 2002, she married entertainment lawyer Andrew Krents, after they were introduced by fellow novelist Amy Sohn. Her work has appeared in The New York Times Magazine, The New York Observer, London's The Independent, Cosmopolitan, Harper's Bazaar, Ms., Mudfish. She teaches at the New York Writers' Workshop.