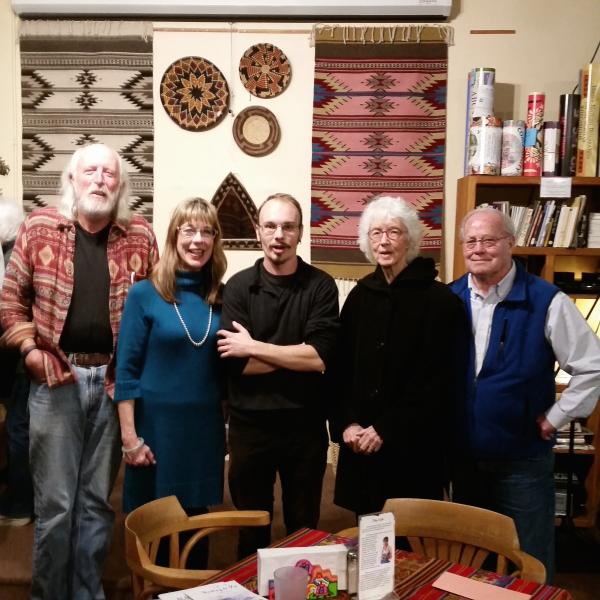 Join five Olympia poets for a celebration of place and how it inspires us.  Bill Yake, Barbara Gibson, Dean Olson, Joanne Clarkson and Brian McCracken will read poetry on Saturday, December 5, beginning at 7 p.m.  The event, titled “Local Voices, Local Places” is part of the Olympia Poetry Network’s 25th Anniversary celebration and the first of a series to raise awareness of our area’s talented writers.  The featured poets all have books available on the ‘Local Poets’ shelves at Orca.  The event is free.

Dean Olson taught at universities in Hong Kong, Alaska, and Canada, and is emeritus faculty at The Evergreen State College in Olympia, Washington, where he led seminars in economics, cultural studies, and maritime history. He has sailed the Galapagos Islands, the Pacific Ocean, and the Gulf of Alaska, and spent months with students on the Salish Sea. He has published twelve poetry collections.  His poems can be found in The Georgia Review, Prairie Schooner, The Lyric, Rattle, Atlanta Review, Windfall, Cascade #2, and in other publications.  His work has been nominated for the Pushcart Prize and the Washington State Book Award in Poetry.  His newest book, When I Reach You, was just published in November 2015.

Joanne Clarkson’s fourth poetry collection, “Believing the Body,” was published in 2014 by Gribble Press. She was awarded a 2014 GAP grant from Artist Trust to complete her next full-length volume about Fate which she completed after an excellent experience at the Colrain Conference in New Mexico this June.  Poems have appeared recently in Rhino, The Baltimore Review, Arcana: The Tarot Poetry
Anthology, The Healing Muse and Fjords Review. She has a Master’s Degree in English and teaches writing workshops.  After caring for her mother through a long illness, she re-careered as a Registered Nurse and continues to work parttime.  Her hobbies including reading palms and Tarot.

Bill Yake has been local in several watersheds: the Spokane, the Palouse, the Flathead, the Deschutes, Scatter Creek, and -- for the last 20 years -- Green Cove Creek. Orca Books carries three of his poetry collections: This Old Riddle: Cormorants and Rain, The Islands at the Edge of the World, and Unfurl, Kite, and Veer.

Brian McCracken's poetry is militantly vulnerable, contagiously expressive, and coming to a stage near you. He is the founder of Old Growth Poetry Collective, sits on the board of the Olympia Poetry Network and has a poetry for making his poetry happen whether his or not. Brian competed in the 2014 National Poetry Slam, coached Olympia's first team at the 2015 National Poetry Slam represented Oly at the Individual World Poetry Slam and is the author of two chapbooks, Dotted Lines: A Roadside Manifesto for Word Bleeders and If a Caterpillar Flaps Its Wings.

Barbara Gibson was born in 1930, and grew up in Normal, Illinois.  She attended Oberlin College, the University of Iowa, Wayne State University, and the University of Washington. Since the 1960’s, she’s been active in the civil rights movement, the anti-war movement and the poetry scene where she came to know Allen Ginsberg, Gary Snyder, Kenneth Rexroth and Denise Levertov, among others.  Barbara moved to Olympia in 1985 to work as a mental health counselor at the Evergreen State College.  She writes poetry, plays, and creative non-fiction.