The Po’Poets of POOR Magazine Reading 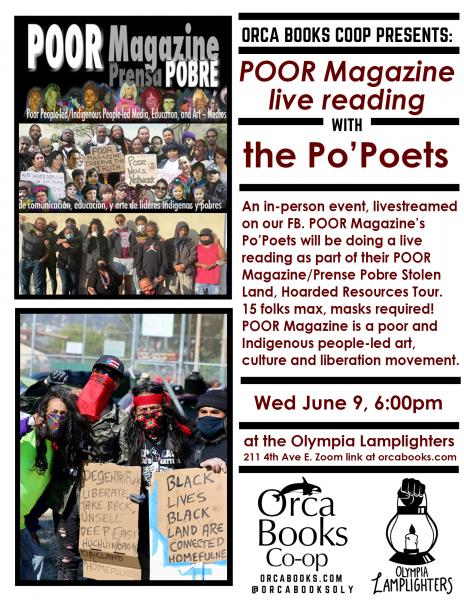 On Wednesday June 9th, join us at the Olympia Lamplighters for a special reading from POOR Magazine’s Po’Poets, as part of their POOR Magazine/Prense Pobre Stolen Land, Hoarded Resources Tour.

More from POOR Magazine: POOR Magazine is a poor and indigenous people-led art, culture and liberation movement. Our Multi-generational, multi-cultural houseless/indigneous people-led movement will be going on the road to share the urgent medicine of how to build self-determined land movements, take back land and our own knowledge systems and cultures right here in Occupied Turtle Island
We will be going to so-called olympia, Washington and offering readings and workshops from our newest books How to Not Call PoLice Ever/Poveryt Scholarship - Poor People-led Theory, Art Words and Tears Across Mama Earth, as well as leading a Stolen Land /Hoarded Resources Tour thru wealth-hoarding neighborhoods, museums of Anthro-Wrongology and Academia to share the urgent medicine of Radical Redistribution and ComeUnity Reparations and finally, we will be meeting/sharing and teaching poor and houseless people led media production with fellow unhoused comeUnity in that territory so they can launch their own media hubs like POOR Magazine';s street based media projects

Zoom link can be found at Orcabooks.com under the events tab!

Orca Books Co-op is inviting you to a scheduled Zoom meeting.