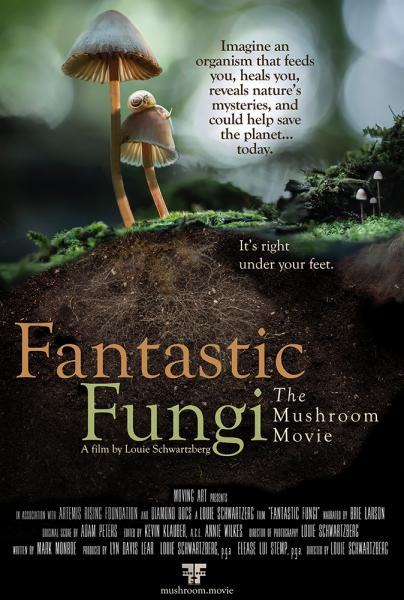 Come on down to Olympia Film Society on Thursday, March 26th for screening of FANTASTIC FUNGI (at 6:30 p.m.) and a post-screening Q&A with special guests! Orca Books will be tabling and selling books for the event.

One Movie. One Planet. One Movement. One Day…500+ theaters around the world…

On March 26th, 2020, Fantastic Fungi Day is bringing the fungi kingdom and all of its inspiration and beauty above ground for a one-of-a-kind immersive consciousness-shifting screening event that will interconnect global communities as we mirror the wisdom of the underground mycelium network and connect with one another. Fantastic Fungi will screen in 500+ venues across the globe including a not to be missed conversation with award-winning Director Louie Schwartzberg, renowned Mycologist Paul Stamets and other luminary special guests. Screenings in host towns and cities include New York City, Los Angeles, Chicago, London, Paris, Sydney, Melbourne, Sao Paulo, Panama City, Mexico City, Vancouver, Toronto, Tokyo, and many more. Now is the time to come together as one on March 26th and join Louie Schwartzberg, Paul Stamets and others as we honor our partner in the world beneath us and begin to bring that which lies below ground … above ground.

“Schwartzberg’s film quickly proves to be one of the year’s most mind-blowing, soul-cleansing and yes, immensely entertaining triumphs.” -Matt Fagerholm, rogerebert.com

“A charming blend of science and conjecture, FANTASTIC FUNGI wants to free your mind.” — Jeannette Catsoulis, The New York Times

“Do not miss “Fantastic Fungi,” one of the most beautifully powerful and intellectually stimulating films of the year and perhaps even the decade” – Pamela Powell, Reel Honest Reviews