The Milk of Amnesia with Danielle Janess 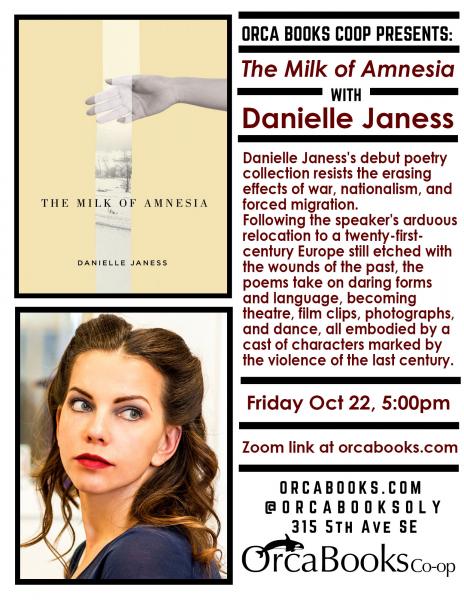 Join us on October 22, Friday at 5:00pm for a virtual reading and discussion of Danielle Janess’ poetry debut, The Milk of Amnesia.

Danielle Janess's debut poetry collection resists the erasing effects of war, nationalism, and forced migration. Following the speaker's arduous relocation to a twenty-first-century Europe still etched with the wounds of the past, the poems take on daring forms and language, becoming theatre, film clips, photographs, and dance, all embodied by a cast of characters marked by the violence of the last century. Arrested in Warsaw within the first twenty days of the Second World War, Janess's maternal grandfather was sent to a Soviet gulag where he survived for three years before joining the Free Polish Army in Russia and later the battle of Monte Cassino in the Italian Campaign. Many of the poems in The Milk of Amnesia grow from the soil of Warsaw and Berlin, where the poet-speaker catapults herself and her young child in an effort to locate and unearth their family inheritance. Drawing from the tradition of poetry of witness, The Milk of Amnesia performs a visionary resistance, lit with signposts in a charged atmosphere. An address to our ongoing struggles with historical memory, these poems act as both artifact of and antidote to our time.

Danielle Janess grew up on the shores of Lake Huron in Treaty 29 territory, Bright's Grove, Ontario, Canada and now divides her time between Victoria and Seattle. She holds an MFA in Writing, and a BFA in Theatre from the University of Victoria, and has lived and worked in Berlin, Germany. Her interdisciplinary work as a writer, performer, theatre artist, editor, and translator, has appeared in journals and anthologies, on stage and on film, in Canada, Germany, France, the USA, and the UK. The Milk of Amnesia is her first book.

Orca Books Co-op is inviting you to a scheduled Zoom meeting.

The Milk of Amnesia (The Hugh MacLennan Poetry Series #57) (Paperback)