Please join us for an evening with Lori Larson, Bob Young, and John Hughes in discussion and conversation of their book 1968: The Year that Rocked Washington. There will be time for questions and signings after the talk. 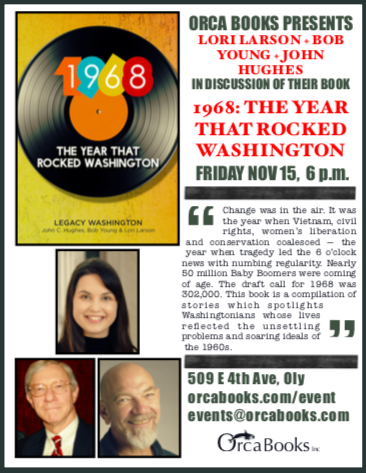 1968 changed us in ways still rippling through our society a half-century later.

Change was in the air. Everywhere. From Saigon to Seattle, Paris to Pasco. On college campuses, the campaign trail and evergreen peaks, Washingtonians were spurred to action. It was the year when Vietnam, civil rights, women’s liberation and conservation coalesced — the year when tragedy led the 6 o’clock news with numbing regularity. Nearly 50 million Baby Boomers were coming of age. The draft call for 1968 was 302,000, up 72,000 from the prior year. 1968: The Year That Rocked Washington is the latest compliation of stories from Legacy Washington. This compelling book spotlights Washingtonians whose lives reflected the unsettleing problems and soaring ideals of the 1960s.

“These people may have had differing politics and goals. But they had one thing in common: The courage of their convictions. And their stories show the power of a committed individual to make a difference.” — Secretary of State, Kim Wyman

Lori Larson has been an historian with the Office of the Secretary of State for over 15 years. A graduate of The Evergreen State College, she has an extensive knowledge of Washington State history, more specifically, the people who shape that history. Lori’s role as senior researcher for Legacy Washington has recently moved into writing, where she has contributed stories on Rep. Cindy Ryu and Dr. Maxine Mimms to Legacy Washington’s books: Korea 65: The Forgotten War Remembered and 1968: The Year that Rocked Washington.

Before becoming a historian for the state of Washington, Bob Young was a newspaper reporter for 26 years, including 15 with The Seattle Times. In 2015, Bob shared the honor of winning a Pulitzer Prize for his coverage of the Oso mudslide. He lived on a Navy base in the Philippines in 1968.

John C. Hughes is the chief historian for the Office of the Secretary of State. He retired as editor and publisher of The Daily World in Aberdeen in 2008 after a 42-year career in journalism that saw him win awards for reporting, photography, historical features, editorials and columns. An alumnus of the University of Puget Sound and the University of Maryland, he is a trustee of the Washington State Historical Society. Hughes is the author of 11 books on Northwest history, including On the Harbor: From Black Friday to Nirvana; Booth Who?, a biography of Governor Booth Gardner; Slade Gorton, A Half Century in Politics; Lillian Walker, Washington State Civil Rights Pioneer; Governor John Spellman: Politics Never Broke His Heart; Pressing On, the story of the family-owned Seattle Times and Wenatchee World. His latest books are “Un-sold,” a biography of former congresswoman Jolene Unsoeld; Washington Remembers, a collection of profiles of World War II veterans; The Forgotten War Remembered, Korea 65, and 1968: The Year that Rocked Washington. He is now working on a biography of Congresswoman Julia Butler Hansen, D-Wash., one of the most formidable lawmakers in U.S. history.