An Iliad: A play by Lisa Peterson and Denis O'Hare

Please join us at Olympia Family Theater for an evening of epic drama, a performance of An Iliad by Lisa Peterson and Denis O’Hare, with Scott Douglas and Nancy Curtis, and directed by James O’Barr. This play is based on Homer’s The Iliad, translated by Robert Fagles. Doors open at 6:30 p.m. and the play begins at 7:30 p.m.!

This is a Benefit Show for Orca Books! All proceeds go to our transition to Co-op! 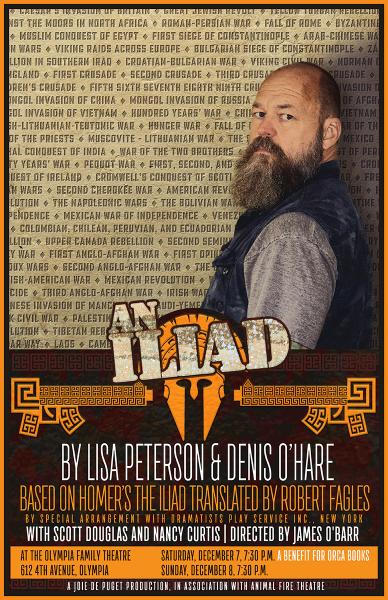 An Iliad, like Homer’s great epic poem, is a story of war, seemingly endless war. The Iliad tells the story of the Trojan War, waged some 3000 years ago in the Greek isles, between the Achaeans, led by the legendary warrior Achilles, and the Trojans, led by Prince Hector. Homer’s tale begins in the 9th year of the war, and ends with Hector’s death. The play, written in the wake of the U.S. invasion of Iraq, uses both the verse of the original, in the majestic translation by Robert Fagles, and contemporary language and topical references, to tell the story of war’s devastation, then and now. The storyteller is The Poet, charged by the gods to speak as a witness to the destructive power of that war, give voice to men and women caught up in the conflict, and recount the dark fate of the beautiful city of Troy as a warning, urgently asking his audiences, “Do you see?”

ABOUT THE ACTORS, + THE DIRECTOR

Scott Douglas (The Poet): Scott has performed with all of Olympia’s major theater companies, including Harlequin Productions (Cymbeline), Olympia Little Theatre (Shadowlands; Circle Mirror Transformation), Theater Artists Olympia (The Complete Works of Wm Shakespeare, Abridged), and Olympia Family Theater (The House at Pooh Corner; The Somewhat True Tale of Robin Hood; Tales Told in Ten). Scott has been a member of the Animal Fire Theatre Company for eight years, appearing in seven of AFT’s “Shakespeare in the Park” productions, and directing King John in the summer of 2015. He’s also a member of AFT’s board of directors.

Nancy Curtis (The Muse): Nancy is a multi-woodwind player who has lived in Olympia since 1979. She is currently a member of the mostly-female eclectic quintet/sextet "Bevy.” As a jazz musician and longtime partner of the late jazz composer/saxophonist Bert Wilson, she performed in his band "Rebirth".  Over the years, she has played in the "pit" (sometimes onstage) orchestras for "The Music Man,” "Gypsy,” one of the Harlequin "Stardust" holiday musicals, and Capitol Playhouse productions of "The Producers,” "The Wiz,” "Legally Blonde,” and "Hair.” She is a tree-hugger.

James O’Barr (Director): James’s work in theatre began on the West Coast, where he was a member of the Berkeley Stage Company, and continued on the East Coast, where he was director of the Children’s Performing Arts Center in Keene, New Hampshire, actor and director at the Depot Theatre in Garrison, New York, and, before moving to Olympia two years ago, director of the Theatre Group at the Otisville Correctional Facility in New York’s Hudson River Valley.