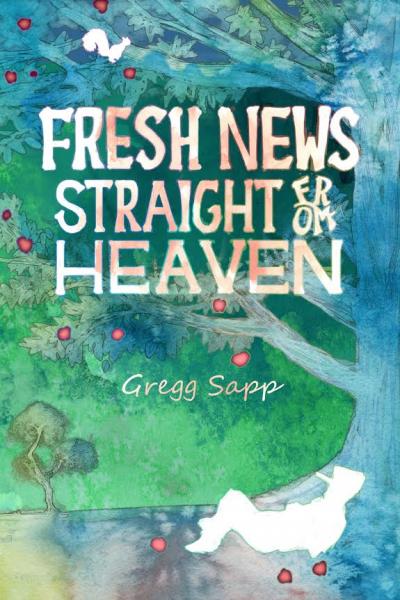 Almost everybody has heard of Johnny Appleseed. Whether from a children’s book or a history course from long ago, or just from images and stories embedded in folk culture, the character of Johnny Appleseed is an enduring piece of Americana. Wherever he went, strolling barefoot through the frontier of Ohio and Indiana, with a mush pot on his head, a pack of seeds on his back, and a Bible in his hand, he declared that he was bringing with him Fresh News Straight from Heaven. Today, he is remembered as gentle and loving as he was eccentric.
Fresh News Straight from Heaven takes place in the brutal and lawless Ohio and the Indiana territory between 1801 and 1812.  This land teems with soldiers, scoundrels, freebooters, runaway slaves, circuit riders, and religious cultists. Meanwhile, a reformed drunkard emerges among the Shawnee as a Prophet. Along with his brother, the war chief Tecumseh, the Prophet begins building an Indian coalition to take back their land. As the tensions mount, Johnny skates blithely through the crossfire and turmoil, spreading his message, impervious to the mockery and derision being heaped upon him. When the War of 1812 breaks out, Johnny, in a desperate act of faith, promises the people he can save them. Thus, he dashes off on a midnight run, seeking to spread peace across a land on the brink of war. With so many lives at stake, Johnny must confront the ultimate test of his convictions.
Fresh News Straight from Heaven is the first adult novel with Johnny Appleseed as its main character published in decades. Based on many hours of research, it depicts actual historical events and characters, along with plot twists consistent with the rich oral traditions associated with him.

Gregg Sapp, a native Ohioan, is a librarian, academic administrator, and a Pushcart Prize-nominated author. Having written over 60 academic articles and some 300 reviews, Gregg published his first novel, Dollarapalooza, in 2011 with Switchgrass Books of Northern Illinois Univ. Press. With his second book, Fresh News Straight from Heaven, mature readers journey through the life and folklore of Johnny Appleseed. He currently lives in Tumwater, WA. More info at: http://www.sappgregg.net/

Fresh News Straight from Heaven: A Novel based upon the True Mythology of Johnny Appleseed (Paperback)