Every Hill a Burial Place virtual discussion with Peter Reid 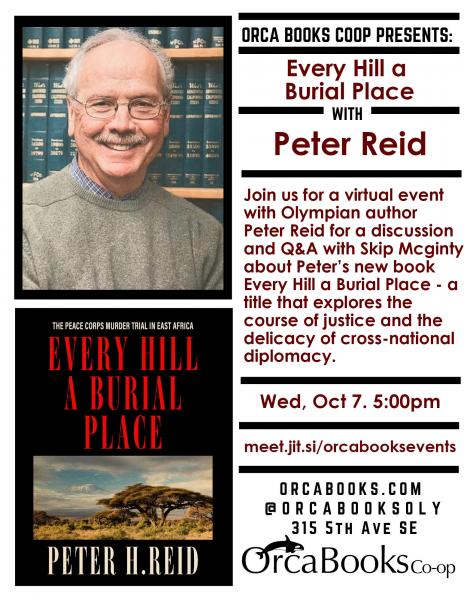 Orca Books Cooperative is happy to host a virtual discussion and Q&A of the new true crime book Every Hill a Burial Place by Olympian author Peter Reid on Wednesday, October 7 at 5:00pm. Peter will be interviewed by Skip Mcginty.

On March 28, 1966, Peace Corps personnel in Tanzania received word that volunteer Peppy Kinsey had fallen to her death while rock climbing during a picnic. Local authorities arrested Kinsey’s husband, Bill, and charged him with murder as witnesses came forward claiming to have seen the pair engaged in a struggle. The incident had the potential to be disastrous for both the Peace Corps and the newly independent nation of Tanzania. Because of the high stakes surrounding the trial, questions remain as to whether there was more behind the final “not guilty” verdict than was apparent on the surface.

Peter H. Reid, who served as a Peace Corps volunteer in Tanzania at the time of the Kinsey murder trial, draws on his considerable legal experience to expose inconsistencies and biases in the case. He carefully scrutinizes the evidence and the investigation records, providing insight into the motives and actions of both the Peace Corps representatives and the Tanzanian government officials involved. Reid does not attempt to prove the verdict wrong but critically examines the events of Kinsey’s death, her husband’s trial, and the aftermath through a variety of cultural and political perspectives.

This compelling account sheds new light on a notable yet overlooked international incident involving non-state actors in the Cold War era. Meticulously researched and replete with intricate detail, Every Hill a Burial Place explores the possibility that the course of justice was compromised and offers a commentary on the delicacy of cross-national and cross- cultural diplomacy.

Skip McGinty is a retired healthcare executive and consultant, spending most of his career at Kaiser Permanente.  For 10 years in the ‘60s and ‘70s he was a Peace Corps Volunteer and administrator in Africa and the Middle East.  He was also an executive for the Los Angeles Olympic Organizing Committee for two years prior to the ’84 Olympics.  He and his wife Judy live on Totten Inlet in Olympia.  McGinty has degrees from Occidental College and Stanford University.

Attendees can visit the link meet.jit.si/OrcaBooksEvents on Wednesday, October 7 at 5:00pm Pacific Time