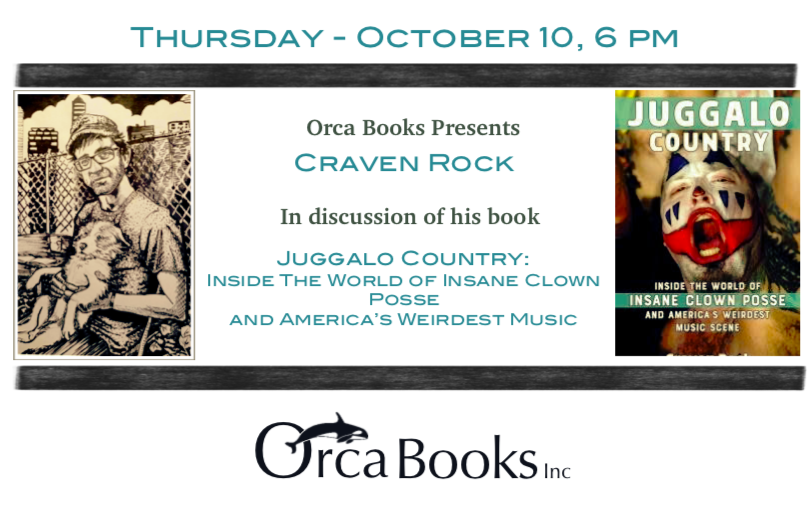 Please join us for an evening with author and notorious notorious investigator of underground debauchery, Craven Rock. Craven will be reading from and discussing his most recent book Juggalo Country: Inside the World of Insane Clown Posse and America's Weirdest Music. There will be time for questions and book signings after the talk.

WHOOP WHOOP The Insane Clown Posse calls itself "the most hated band in the world," but with 11 million albums sold, the horrorcore hip hop duo from Detroit is a widespread music phenomenon with a cult following. This book is the story of Craven Rock's journey to their annual festival, the Gathering of the Juggalos, where legions of fans in clown makeup come together every year to attend this family-reunion-like event and enjoy musical celebrities, feats of wrestling, debauchery, and most of all, a supportive, tight-knit community.Juggalos gained the political spotlight in 2017, when thousands of fans marched on Washington, DC to protest their classification by the FBI as a violent gang. Dwarfing the pro-Trump rally at the same time and place, Juggalos proved themselves to be a growing voice of dissent for some of the most neglected parts of the United States. Rock's reporting casts a light on many contradictions and perils of Juggalodom, sensitively handling questions of gender, health, religion, and what it means to be part of something. Part festival-goer's journal, part music history, part investigative report, part social commentary, Juggalo Country takes us into the heart of a much-derided and controversial movement and shows us the redemptive power of family and community.

Craven Rock has reported on underground debauchery for over a decade and has been published in Razorcake and Best Music Writing 2008. After a long obsession with Juggalos and the Rainbow Gathering, he set out to report on events like these, Gonzo-style, to find out what they’re really all about.