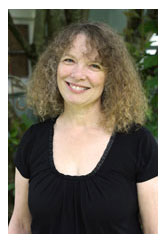 Orca Books is delighted to welcome Terri Cohlene and Doug Keith to the store on this October afternoon. Terri and Doug co-authored the wonderful picture book "Something Special," about a curious little frog who finds a mysterious gift outside his home near the castle moat. Terri will also be signing copies of her new book Witch's Brew and Doug will have copies of his newest title, The Storybook Prince.

TERRI COHLENE grew up in Skyway, a suburb of Renton, Washington where she competed with her two brothers in polliwog-catching, berry-tossing and slug-handling.  Her work is influenced by car trips to Eastern Washington and visits to her grandparents’ apple orchard in Cashmere.  She is the author of nine books for children including: Won’t Papa Be Surprised! Something Special and her newest, Witch’s Brew—Wicked, Wacky Poems for a Dark, Dark Night.  She wrote and assisted in the production of Clique, a stage play for young adults.  Her poetry has appeared in such publications as:  Godiva Speaks, Pontoon 8 & 9, Floating Bridge Review, Arnazella, Stories with Grace, Switched on Gutenberg, and the anthology, America at War.  She collected and edited two adult poetry  anthologies, Godiva Speaks I & II. She serves on the board of Olympia Poetry Network, and is a freelance editor in Olympia, Washington.

Doug Keith began his professional career as a commercial artist in New York City shortly after leaving art school in 1974. He relocated to Seattle,Washington in 1979 for a position with the industrial design firm, Teague Associates. In 1982, Doug moved on to assistant art director at KIRO TV (CBS) where he received an Emmy award that same year for graphic design. He left broadcasting in 1983 to start his own illustration and design studio. Doug Keith has thirty years of experience in illustration, commercial art, graphic design, sculpting and fine art. His versatility earns him a wide range of projects including more than forty illustrated books, a series of popular alphabet posters, sculptures for garden statuary and numerous fine art commissions. Seattle’s EMP Museum tapped his sculpting skills to create museum quality mannequins for many of their exhibits.