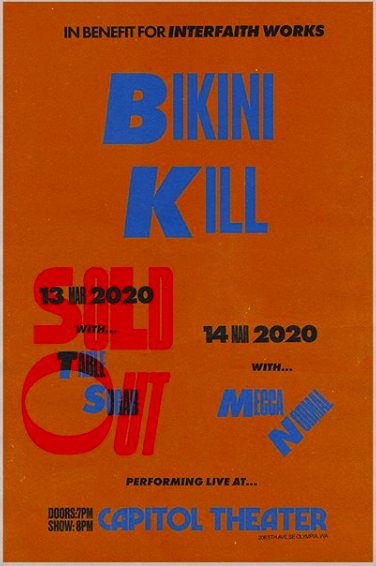 Orca Books is stoked to be selling books + collection donations for the Bikini Kill & Table Sugar & Mega Normal Benefit Show for Interfaith Works! We'll be tabling at the new Burial Grounds location THREE HOURS before the doors open at 7:00 PM! Our table will feature books on the Riot Grrrl movement and prominent punk rock femme bands who made a stand and paved the way for feminism, music, and art over the course of the history of punk, incl. Riot Grrrl history, Kim Gordon, Patti Smith, Carrie Brownstein, and more!

Bikini Kill is a feminist punk band that was based in Olympia, WA and Washington, DC, forming in 1990 and breaking up in 1997. Kathleen Hanna sang, Tobi Vail played drums, Billy Karren (a.k.a. Billy Boredom) played guitar and Kathi Wilcox played bass. Sometimes they switched instruments. Bikini Kill is credited with instigating the Riot Grrrl movement in the early 90’s via their political lyrics, zines and confrontational live show. The band started touring in June 1991. In addition to touring the US several times, they also toured Europe, Australia and Japan. Bikini Kill recorded and released a demo tape, two EP’s, two LP’s and three singles. Their demo tape was self-released, while their first two records came out as a full length CD/Tape and their singles were posthumously collected on CD.

Bikini Kill believed that if all girls started bands the world would change. They actively encouraged women and girls to start bands as a means of cultural resistance. Bikini Kill was inspired by seeing Babes in Toyland play live and attempted to incite female participation and build feminist community via the punk scene. They used touring as a way to create an underground network between girls who played music, put on shows and made fanzines. This independent media making and informal network created a forum for multiple female voices to be heard.

Bikini Kill reunited in the Spring of 2019 with original members Kathleen, Kathi, and Tobi who were joined live by Erica Dawn Lyle. They sold out multiple shows in Los Angeles, NYC, and London as well as headlining Riot Fest in Chicago.

"Olympia’s Table Sugar enter a venerable lineage of school punks who turned their lack of technical skill into the ultimate virtue: a remarkably original perspective. The band took shape on the hallowed ground of Evergreen State College in 2014, and the current lineup—Pascal, Ella, Aidan, and Jenna—learned to play together through intuition. They gave themselves a perfectly Warholian name: a cheap, everyday product that is sneakily addictive. In one self-authored biography, Table Sugar quote 1970s soft-rock band the Archies and write, “music is hot. and when sugar is hot it turns to syrup. and we’ll stick 2 u.” After a few listens, you can’t shake Table Sugar off" - Bio from Pitchfork 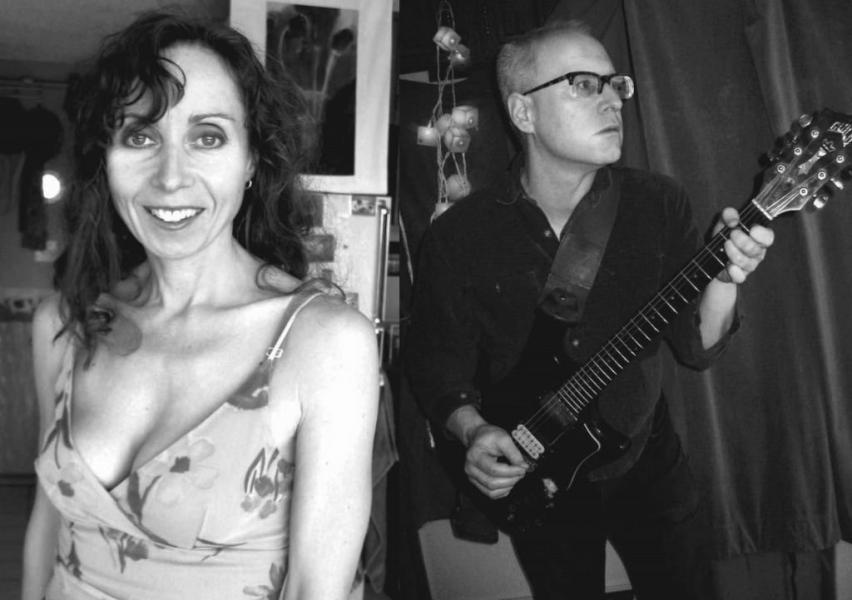 Mecca Normal is a two-piece indie rock band from Vancouver, British Columbia, Canada, formed by Jean Smith and David Lester in 1984. Smith writes lyrics and sings in a style that is often confrontational and laced with feminist themes; Lester's melodic yet dissonant guitar swirls and loops around her vocals. Merging the personal with the political in their songs and art-related activism, they helped define the sound and spirit of the early diy/indie rock/riot grrrl movement alongside bands such as Beat Happening and Bikini Kill.

Interfaith Works, founded in 1945, is a non-profit coalition made up of 32 diverse faith communities in Thurston County. Interfaith Works homeless services is one of the primary service providers for single adults and couples without dependent children living with extremely complex challenges related to their physical and mental health. IW is the only shelter/homeless services program that explicitly prioritizes women and LGBTQ+ adults in our community. We always aim to hire people who reflect the experiences of our guests, so, like our shelter guests, the majority of our staff have lived experience with mental health and substance use challenges, homelessness, poverty, and are trauma survivors. At our 42-bed nightly shelter we specifically screen in the people who have been left out of all other services. Our ideal guest is over 50 years old, meets the federal definition for “chronic homelessness”, is living with a permanent disability either physical or mental health related or both, and living with severe, persistent substance use challenges. We are a high access shelter which means that we serve all genders, allow pets, we allow couples to stay together, we don’t require ID, and we focus on building relationship and trust aimed to create an environment of community safety. We have moved over 200 people into permanent housing since we’ve opened and served over 1700 unique individuals in 5 years. We are on the front lines of a daily response to a national crisis, and one of the most complex and polarizing issues facing our community today. We are dedicated to working with all people, businesses, and organizations to make our community safer, and give everyone the opportunity to thrive.

List of items they will gladly accept for donations night of the show: