Prepare for the Landings (Paperback) 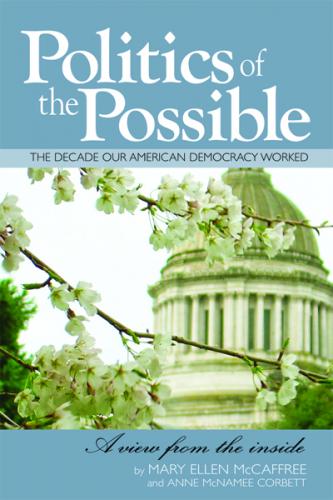 us in welcoming Mary Ellen McCaffree and Anne McNamee Corbett to the store on this February evening for a discussion of politics past and present.

Using the lens of a citizen who entered politics to secure better funding for her children's schools, Mary Ellen McCaffree journeys through one dynamic decade that transformed Washington state. We witness the inner workings of a government overhaul, led by citizens and politicians who enter at the bottom of the legislative heap and rise to become leaders of a sweeping program of bi-partisan reforms, culminating in the most productive legislative session in their state's history... and perhaps of all time. This 1960's government success story impels newer generations to take a more active citizen role - first by understanding how our government is designed, then by entering the process to problem-solve ever new challenges. The engaging narrative about real people, and the actual relationships required to legislate complex change, demystifies the gears of governing and empowers 'ordinary citizens' to speak up and take part in our governmental process.

Politics of the Possible (Paperback)

Orca is delighted to welcome fantasy novelist Neil Lynn Wise back to the store for a signing and meet and greet this July afternoon.

Neil Lynn Wise makes his daily bread as an attorney in Olympia; by night, and perhaps for one Saturday afternoon, he is known as the author of fantasy fiction, in this case the Return of the Lucca trilogy. This here is epic stuff.

A veteran warrior, Morgan Caeda faces the deadliest challenge of his career. The Mhoul, an unholy mingling of human and alien, seek to unleash an ancient terror upon  upon the world of Kalnaroag. After surviving a massacre that slaughtered his entire Legion, Morgan leaves his mountain sanctuary to search for the truth about the Mhoul plot.

During his journey he is reunited with old comrades in arms, Maximilian, reputed to serve death herself, and Taurus, captain of the warship Windrider. He also meets the beautiful Princess Celestine, whom he could love, if he just had the time.

Hunted by Mhoul agents, Morgam and his companions encounter the Ha'ashtari, fierce nomads of the high plains, and the reclusive Centaurs.  Caught up in a titanic conflict that will determine the fate of their world, they discover that faith, honor and courage are still the best weapons of all.

END_OF_DOCUMENT_TOKEN_TO_BE_REPLACED

DUE TO COVID-19, WE ARE CLOSED UNTIL FURTHER NOTICE, but we ARE doing curbside pickup at our new space. Call us to order in-store books, and order new books online here on our site and select "curbside." (Or you can have it shipped to your home!)
Curbside hours are Mon. - Sun.: 12pm - 6pm
We are not purchasing used books at this time, but we will soon!